It’s time to review illumiflow Laser Cap – which is a last-generation hair device.

According to its claims:

So is illumiflow really worth it?

Its price starts at $550, so you should definitely think twice before buying it.

For this reason – I decided to dig deep into this product and see what’s the actual truth behind it.

Note: This review is based on my opinion + research on illumiflow.

Versions: There are two:

The difference is that the second version covers the scalp slightly better.

That’s because the lasers (diodes) are closer and more numerous.

Cheapest Place To Buy: Amazon (though its official website has similar prices)

Just like most laser devices – it also claims to:

Worth Buying?: Not really – even though it’s a totally legit product:

Instead – I recommend a $300 cheaper laser device that works just as well.

What Is illumiflow? A Quick Overview

So far, nothing new.

There are many other laser devices – so what makes illumiflow different?

According to its claims:

For this reason, it claims to work better than similar products.

Also – it claims to be cheaper than those (price/laser is lower, according to them).

However, it also has a negative side it doesn’t mention:

So despite claiming to be the best laser device on the market – I kind of disagree.

But now that you know the main things about illumiflow, it’s time to analyze it closer.

And that’s because of its #1 advantage – the high number of lasers it uses:

That’s why I rated it so high at this chapter.

In a few words – illumiflow’s effect is based on its lasers:

Basically – it’s the same mechanism as in every laser device.

The only difference is that illumiflow contains a higher number of lasers.

Also – it has some real evidence behind:

So in terms of technology alone, illumiflow is clearly a quality product.

Now – illumiflow is a laser cap.

So how does it compare to laser combs?

Well – the mechanism is about the same:

The actual difference is that you need to move the comb through your hair manually.

On the other hand – illumiflow:

However, laser caps (and illumiflow) are also about $300 more expensive.

That’s why I personally would stick to a comb instead.

But in terms of technology and effect – there’s pretty much no difference between illumiflow and combs.

To be honest – illumiflow has a great technology:

But despite its quality mechanism, it’s not my top recommended laser device.

I personally think laser combs are a much better choice (in terms of price/effect).

Still – I fully admit illumiflow is a quality product, if you wanted my verdict.

First of all – illumiflow’s website gives out clear directions.

They are available for every potential customer – so you don’t have to buy the product first.

Obviously – the devices themselves come with a user manual.

Here’s how you should use illumiflow (it’s the same for both versions):

Now – using the actual device is quite easy and it shouldn’t be too hard even for a beginner.

Plus that the instructions are very straightforward.

However – there’s one thing I personally dislike about it:

But compared to other laser devices, it is.

Most laser caps require under 10 minutes (still 3 times per week).

So from this point of view – illumiflow kind of disappoints me.

Now – these tips aren’t going to change your results significantly.

illumiflow is really easy to use, in terms of directions.

However – it needs to be used quite a long time (30 minutes every other day).

So that’s a reason why I’m not its biggest fan, in terms of usage.

I don’t have a personal experience with illumiflow – so I can’t say much here.

However, I tried looking into other people’s opinions on this device.

Luckily – I found lots of real reviews of it on websites like Amazon.

Since Amazon is known for verifying buyers – those reviews are clearly legit.

Surprisingly – I found many negative reviews on this device.

It’s true that opinions are quite mixed up.

But overall – there were way more negative reviews than in similar products.

So let’s see what most people think about illumiflow:

As I said – I found both positive and negative reviews.

That’s why I was sort of surprised to see so many critics.

Basically – most negative reviews were related to:

Now – even though I haven’t used illumiflow, I tend to agree with some of these complaints.

Its price is indeed very high and it does require a very long time of use.

But obviously, I can’t tell about its effect and built.

However – since I found more than 3 complaints on each problem, I’m pretty sure they are true.

But surprisingly (for its superior technology) – it also has a lot of complaints.

Compared to other laser devices, I would say it has far more complaints.

That’s why I can’t guarantee for its results.

Still – I personally recommend going for a cheaper laser device that does the same.

illumiflow has both a good and a bad side at this chapter.

I will explain both below.

First of all – this device looks quite expensive in both versions:

To be honest – I would not pay so much on a laser cap.

This kind of products don’t work for everyone – so it’s pretty risky spending such a high amount.

Especially since there are many cheaper alternatives on the market.

That was the bad side of illumiflow’s price.

What about the good side? Well:

But that’s not a completely positive fact.

That’s because illumiflow doesn’t seem to work for many people (according to reviews).

So the fact that it contains more lasers doesn’t really help.

Therefore – it’s the very high price that remains on top.

I will only compare illumiflow with my #1 recommended laser device.

I’m talking about a laser comb from HairMax.

Basically – illumiflow seems to have a stronger technology (at first sight).

But judging after the reviews and usage time, it seems like HairMax’s product is better.

However, the #1 advantage is its price.

So I would definitely recommend going for HairMax instead.

Considering its high number of negative reviews, I don’t think it’s worth it.

That especially when you can get the same results with a $250 device.

So I strongly recommend that alternative instead.

First of all – laser devices aren’t as easily available as other hair products.

That’s the reason why I never rate them very high at this chapter.

However – illumiflow is quite easy to find:

I personally recommend Amazon, as it’s easier to get a refund/return the product.

But it might not be as simple as on Amazon, that’s why I would prefer it instead.

Here’s how I would sum up my opinion on illumiflow (in 3 ideas).

This product is one of the best laser devices for hair.

But that’s only on paper (in terms of mechanism):

Also – it has a trustworthy brand behind, so it’s clearly legit.

For this reason, it has a great technology overall.

To my surprise, illumiflow doesn’t work that well in reality:

So even though it looks good on paper – it seems quite different in reality.

That’s a main reason why I’m not its fan.

3. Not Really Worth It

Besides its poor effect, illumiflow is also very expensive.

Now – laser caps are far from cheap and this device isn’t an exception.

But since there are cheaper alternative with the same results, I don’t think illumiflow is worth the money.

If you can get the same effect for less money, why pay more?

My Verdict – Is illumiflow Worth It?

Though it looks great on paper – it seems quite different in reality:

Now – illumiflow is clearly not a scam, nor a useless product.

It actually has enough customers that swear by it.

But compared to other laser devices – it has far more complaints.

So what would I recommend instead? A laser comb from HairMax:

So if you really want to try a laser device, I recommend going for a cheaper one.

HairMax’s device seems to work just as well as $800 laser caps – so why pay more?

You can find it for $250, which is the very best price I have seen in a laser device.

That’s why it’s by far my #1 alternative to illumiflow. 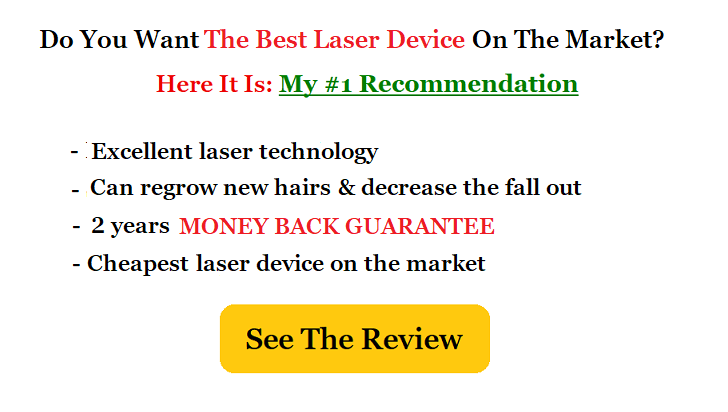