It’s time for my John Frieda Hot Air Brush review – because at first sight, it looks like a great tool:

But honestly – at this price, it seems too good to be real. So is this hot brush that useful – or there’s a scam behind?

I tried to dig deep into this product and here’s the truth I found out.

Note: This review is based on my personal experience with John Frieda’s brush. 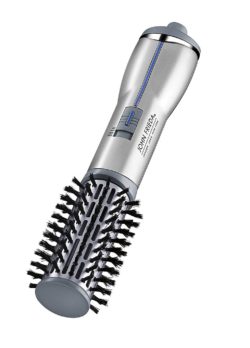 Designed For: Straightening or curling any type of hair.

It’s great if your hair tends to be frizzy – because it has a special technology that prevents it.

Worth Buying?: Pretty much yes. It’s a good tool for these money, but it’s surely not perfect.

So I wouldn’t recommend it for thick or damaged hair. But in other cases, it’s worth buying – especially at this price.

In my opinion – a tool’s technology is the equivalent of a product’s ingredients.

For this reasons, it’s one of the most important aspects.

Now – John Frieda’s brush has 2 special technologies. So let’s take them by turn.

That’s the reason why many hot brushes make your hair frizzy:

On the other hand, John Frieda’s brush manages to solve this problem due to this special technology. But that’s not all:

Now – this brush has a coating of both ceramic and titanium. It’s actually a combination of these 2.

In case you didn’t know – titanium offers a better protection than ceramic.

Conclusion: These 2 technologies of John Frieda’s brush are great – especially for a $40 tool.

The only downside I can find is that the coating isn’t all titanium. That would have protected the hair even better.

Leaving aside the technology, here’s what you should know about the brush end:

To be honest – I don’t really agree with the last one. But more on that later on.

Anyway – I do admit this tool is great for frizzy hair and it also adds some volume. After all, it’s a brush – and brushing your hair alone adds extra volume.

Conclusion: I’m not the biggest fan of the brush end, because it doesn’t seem very high quality.

But considering it has soft bristles and does its job (at least for a while) – I can’t really complain.

Basically, you can use John Frieda’s tool for 3 major things:

In these 3 situations – it works really good.

Now – I don’t recommend using this tool on wet hair. Even the label recommends having your hair at least 80% dry before you use it.

Truth it – it also works on wet hair and styles it really nicely. But you run the risk of hair damage – if you do it often.

So if you’re looking for a styling tool that works directly on wet hair, I wouldn’t recommend this one.

In case you were wondering how exactly you should use this tool – here’s how I do it:

What I personally don’t like is that there’s one button for all 3 heats. You have to switch it – but it’s pretty badly created:

So it’s pretty uncomfortable until you get used to it. You always feel like switching to top for the highest heat – which is actually in the middle.

Plus – when you use the high heat, the handle gets pretty hot. So holding it isn’t that easy.

To be honest – John Frieda’s product wasn’t my favorite hot brush ever:

So let me sum up how it worked for me.

1. The Positive Side – at some chapters, it’s really good:

Besides – I could get the curls I wanted with the low heat. I didn’t have to use the highest setting.

However, my hair is naturally curly – so that might explain.

If your hair is very thin and soft – the low heat might not be enough.

2. The Negative Side – here’s what bothers me most:

Now – as I have naturally curly hair, this tool created nice curls for me.

But when it came to straightening my hair – it wouldn’t last a lot. The hair would become wavy a few hours after.

Conclusion: After trying it out – I realized it’s not so amazing.

If your hair is straight, it’s not going to create amazing curl. But it will straighten your hair really nicely – and it’s the opposite for curly hair.

So it’s not the kind of miraculous tool – as I initially thought.

You can find John Frieda’s tool in 2 versions:

Now – I have the largest one and I have the feeling it’s pretty small. Here’s what I mean:

Let’s say you need about 30 seconds per hair strand (though you might need more).

If your hair is thick – you would surely need at least 30 minutes to finish.

So the 1.5 inch version seems too small to me. There’s no point mentioning the 1 inch one – which is even smaller.

Conclusion: I wish they had a larger size as well.

The 1.5 inch version is okay for thin or average hair. But if yours is thicker – I don’t really recommend it. You will need too much time to style your hair with this brush.

Honestly, when it comes to price – this tool is hard to beat:

Now – there’s something I need to mention.

But surprisingly, the smallest version (1 inch) costs about the double – around $80.

So if you decide to get John Frieda’s hot tool – I strongly advise you to get the larger version:

Conclusion: Overall, the price of the 1.5 inch tool is really good – most of us probably afford it.

I decided to take a look at other customer reviews – so that I can give an honest verdict about this tool.

Note: I only considered those reviews that were authentic.

So here’s what I found out:

But here’s one interesting fact:

Most negative reviews complained about the bad quality – not about how it worked.

Now – I doubt anyone paid attention to hair shine, as I did. In my case, there wasn’t any – even though the label promised.

But I’m sure most people did pay attention to the volume and frizziness.

So if there weren’t lots of complaints – John Frieda’s tool is surely not bad.

Here’s what I would remember about John Frieda’s hot brush:

1. Great For Frizzy Hair – actually, it’s one of best tools I tried at this chapter:

Now – if your hair isn’t very frizzy normally, you probably wont’t see any difference. But otherwise, there should be a change.

2. Works Differently For Hair Types – here’s what I mean:

However – if your hair is normally curly, this tool won’t straighten it too well. That was my own case – and the hair started getting wavy in a few hours.

On the other hand, the curls it creates for straight hair aren’t that nice either.

So it works differently – depending on your hair type.

3. Quite Cheap – compared to other tools, John Frieda’s product is very affordable:

To be honest, it’s one of the most affordable hot brushes I tried.

Plus – it has 2 pretty good technologies, so it’s surely not a bad quality tool.

My Verdict – Is John Frieda’s Brush Worth It?

It’s not my top recommendation – but at this price, it’s worth giving a shot.

Overall – it’s a great tool, especially because the 2 technologies it has. But it also has some downsides:

Other than that – I have mostly praises for John Frieda’s hot brush.

As I said – it’s not my favorite tool ever, but I must admit it’s a great option for these money.

I wouldn’t recommend it for:

But other than those categories – I think it’s a good choice, especially for the short term.

5 thoughts on “My John Frieda Hot Air Brush Review – Too Good To Be True?”